So here is a picture of my personal favorite pumpkin planting method. We call this the “Pumpkin Jack” method. If you have ever read the children’s book, Pumpkin Jack by Will Hubbell, you understand. This is the pumpkin left under the snow that illustrates the life cycle so well.

Of course after 5 years of growing pumpkins at Johnstown, our cattle, who are more than pleased to take care of our surplus crop at the end of the season, have planted their own scattered crop of pumpkins with their own method. We call these “Previously Pooped Pumpkins”. They are sprouting strong all over the pasture.

Posted by johnstownfarm on April 29, 2014 in Grass Finished Beef

The last week has been filled with the signs of spring and summer, growth and life.  Here are some of those signs:

Sprouts! Thanks to beautiful weather, the giant pumpkins are sprouting up! We appreciate the rain God!

Kittens! We have at least one new litter of kittens to be cuddled.

Mud! Boys just can’t deny themselves a jump in a muddy puddle.

Turkey chicks! Papa hatched these in his incubator for a friend.

Posted by johnstownfarm on June 6, 2013 in Grammy's Pumpkin Patch

Johnstown Farm wishes everyone a very merry Christmas!  May you and your families create wonderful memories as you celebrate the birth of Christ.

Posted by johnstownfarm on December 18, 2012 in Grammy's Pumpkin Patch

I have to admit that it felt quite cold today out on the farm.  I love the brisk autumn weather, but coupled with the mist this morning…brrrr! Once we were outside running around, we warmed up a bit.  The hot cider and coffee were helpful too.  Besides, do you really want to pick pumpkins on a 90 degree day? Tonight there is a frost/freeze warning. Of course, this is a bit dangerous especially for our pre-picked pumpkins, BUT we have it all under control. It takes some work, but all of our pre-picks are tucked in snug tonight. Tomorrow, come on out and choose one of the most coddled pumpkins on the planet! 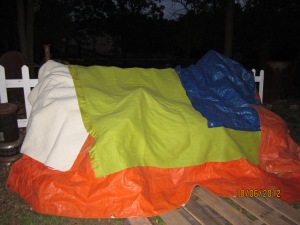 Posted by johnstownfarm on October 6, 2012 in Grammy's Pumpkin Patch

We enjoyed a great opening weekend at Grammy’s Pumpkin Patch! My favorite part was, as always, watching families connect, play, and make memories. I am looking forward to the week filled with our Agriculture Education classes “In the Class and On the Farm” program.

A brand new world for this little guy! 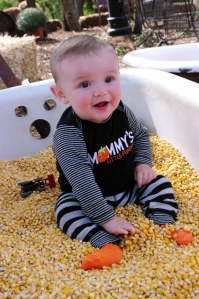 This little guy is too cute!

Posted by johnstownfarm on October 1, 2012 in Grammy's Pumpkin Patch

Today is the kick-off of the pumpkin patch season for Grammy’s Pumpkin Patch at Johnstown Farm, nestled in the Smoky Valley between McPherson and Lindsborg.There is a beautiful selection of pumpkins and gourds from which to choose. The perfect jack-o-lantern is waiting inside of one of those pumpkins just for you!

Sundance Farm will be with us today from 1-4:00. Horse drawn wagon rides with Scotty in the lead!

Come out to enjoy a beautiful autumn day with your family and play all day. We’ve got plenty of Grammy’s famous cinnamon rolls and cookies fresh from the oven. We are excited to see old friends and make new friends this season!

Posted by johnstownfarm on September 29, 2012 in Grammy's Pumpkin Patch

Is It That Time Already?

Last evening, the first of our highway billboards made it to the highway with a little help from the tractor. This year, we mounted the sign on one of the “retired” trucks. Papa and Justin enjoyed tinkering with it in valiant attempt to have it run. I think this entailed pouring fuel in the various parts of the engine; I know for sure that it made for a LOT of smoke and engine revving. In the end, the truck/sign was towed out to the hay meadow that overlooks the highway in between McPherson and Johnstown Farm.  It is crazy to think that the season kicks off in about 5 weeks!

As you can see, Ben had a great time helping the men tow the sign through the fields.

Posted by johnstownfarm on August 15, 2012 in Grammy's Pumpkin Patch