So here is a picture of my personal favorite pumpkin planting method. We call this the “Pumpkin Jack” method. If you have ever read the children’s book, Pumpkin Jack by Will Hubbell, you understand. This is the pumpkin left under the snow that illustrates the life cycle so well. 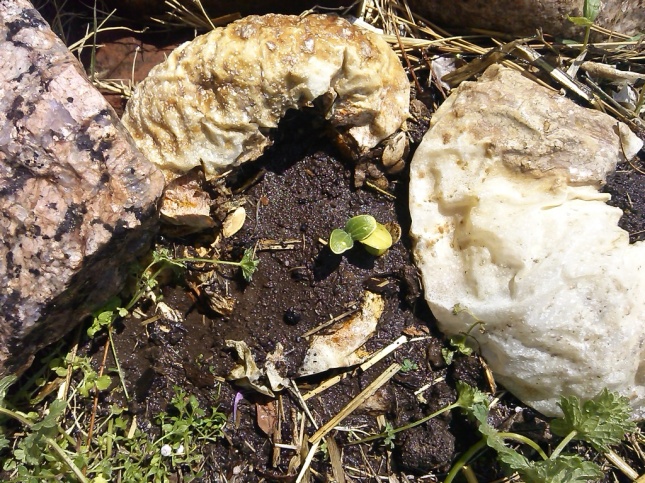 Of course after 5 years of growing pumpkins at Johnstown, our cattle, who are more than pleased to take care of our surplus crop at the end of the season, have planted their own scattered crop of pumpkins with their own method. We call these “Previously Pooped Pumpkins”. They are sprouting strong all over the pasture.

Posted by johnstownfarm on April 29, 2014 in Grass Finished Beef

Those big brutes decided to tromp through one of our pumpkin patches today! My dad, Papa, loaded up a steer early this afternoon, but when he returned with a bull early evening, he found some cattle contentedly chewing their cud (which apparently was comprised of plants from the patch). Papa said they pushed through a fence to the patch, apparently unable to resist the urge of an area filled to overflowing with green plants. Surprisingly, they seemed not to eat on the pumpkin plants themselves, but the weeds that were on the outside edge.  Too bad they didn’t walk neatly around the edge of the patch, but instead, they chose to tromp from one side to the other. Sheesh!

Papa always takes things like this in stride. He is a great farmer in that sense. Grammy is ready to sell off all of the cattle. I vote with Grammy. Angie reminds us all, “God is faithful.”  True, true. I haven’t seen the mess myself, but I’ll head out tomorrow to take some pictures to post.

Posted by johnstownfarm on August 6, 2012 in Grammy's Pumpkin Patch